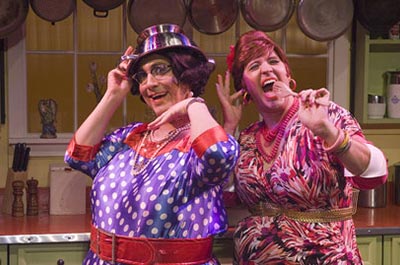 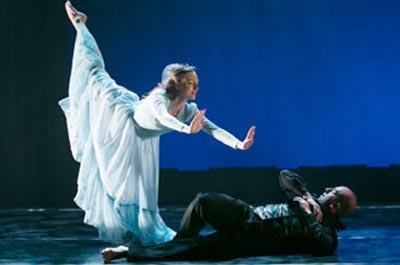 Built in 1989 as a project intended to help revitalize the Phoenix downtown area, the Herberger Theater Center has grown into a well-loved arts space and performance venue. Three resident companies share the space: The Arizona Theatre Company, Center Dance Ensemble, and iTheatre Collaborative. Some of their outreach programs for children include Theater Camp and Wolf Trap, the first focusing on homeless, abused and neglected teens and the second on preschool-aged children.

Not all shows at the Herberger Theatre are listed.

CABARET:
January 4 - January 26, 2020 - Presented by Arizona Theatre Company on Center Stage. This classic musical is set in 1930s Berlin where things are starting to take a turn for the worse. Come to the Cabaret my friend....

WHEN DOUGLASS MET LINCOLN:
February 3 - February 13, 2020 - Presented by Lunch Time Theatre and produced by Grey Matters Productions. This play explores the friendship between Lincoln and Frederick Douglass in a time when intellect was king.

ARIZONA YOUNG ARTISTS' COMPETITION:
February 22, 2020 - This is the 21st annual competition for young artists in the fields of dance, acting and voice.

LA CAGE AUX FOLLES:
March 6 - March 22, 2020 - Produced by Herberger Theater and Arizona Broadway Theatre. This comedy deals with issues of family, belonging and what it means to be a drag queen and a parent of a young man who simply wants his life to be "normal".

SUZETTE WHO SET TO SEA:
April 18 - May 17, 2020 - Presented by Childsplay Theatre. Often in small towns things tend to always go as they have in the past. Suzette wants something different though. She wants to go to sea.

A FIGHT IN THE FIELDS:
June 1 - June 11, 2020 - Lunch Time Theatre. Produced by New Carpa Theater Co. A moving story about Cesar Chavez and his and others fight for farm workers rights during the turbulent 60s.

HIGHLIGHTS AND OUTREACH PROGRAMS AT THE HERBERGER INCLUDE:

LUNCHTIME THEATER - Pack a lunch and go to the theater. Each one act play lasts about 45 minutes long, giving the audience a wonderful opportunity to experience affordable and inspiring live theatre.

ART GALLERY - The Herberger Art Gallery features works of Arizona artists, with a portion of the proceeds from sales going to the Herberger Theater Center.

FESTIVAL OF THE ARTS - Held once a year in the month of November, this festival is a multi-faceted event. Arts of all types are highlighted including music, dance, film and a lot more. Special activities for children and food are also featured.

ARIZONA YOUNG ARTISTS COMPETITION - This competition is for young artists between the ages of 15 and 19. The artists can compete in three categories: acting, dance and voice.

HALL OF FAME - Created to honor Arizona natives who have achieved national or international acclaim. Past winners of this award include Leslie Nielsen and Alice Cooper.

"The Herberger Theater Center is a non-profit 501 (c)(3) organization whose mission is to support and foster the growth of performing arts in Phoenix as the premier performance venue, arts incubator and advocate."